The two most common types of air compressors are single-stage and two-stage.

Hoping to cut right to the chase? Below are the best 2 stage air compressors:

Comparison of the 2 Stage Air Compressors

What is a Two-Stage Air Compressor?

In the most straightforward answer possible, the air is pressurized two times to increase the pressure of the air to higher levels.

Two-stage air compressors will allow users to operate tools that require higher PSI levels; you can expect these compressors to provide over 170 PSI.

Tools like blowguns and certain nailers can require upwards of 115 PSI, something a single stage might struggle to provide.

How a 2 Stage Air Compressor Works

A two-stage air compressor works by gathering air and pressurizing it for the first time in the pressure chamber.

The pressurized air is then carried to a cooling station as pressurizing the air increases the temperature significantly and carries the risk of overheating the device.

Once the air is cooled, it'll then be pressurized for a second time, reaching over 170 PSI.

It's easy to say there are great two-stage air compressors out there, but finding them is another thing. Lucky for you, we've included some of our favorites.

California Air Tools are a reputable brand that tends to provide good quality compressors. This particular two-stage air compressor is oil-free, meaning you'll not have to carry out as much maintenance; the occasional visual inspection is suitable.

The 75-decibel operating noise is decent for a two-stage, oil-free air compressor, which tends to be noisy. You'll benefit significantly from 16 CFM of airflow, allowing the user to operate most construction tools; this can be enjoyed for over 3000 hours of the air compressors' life expectancy.

At only 70 decibels, it's even quieter than the compressor mentioned before. This would be more suited to more quiet environments like a suburban neighborhood. The oil-free system means that you'll not have to deal with any contamination; if you need clean air, this compressor is for you.

You'll be able to operate higher grade tools with the 175 CFM it offers; things like sandblasting and spray painting will be possible with this compressor. An even more significant benefit is the two universal couplers, resulting in two users at once working from the same compressor.

The two couplers provided are great for a small crew; it saves time and even money when you want a quick turnaround for a job. Another benefit of these couplers is that they're universal, meaning they can be used with any compressor fitting. 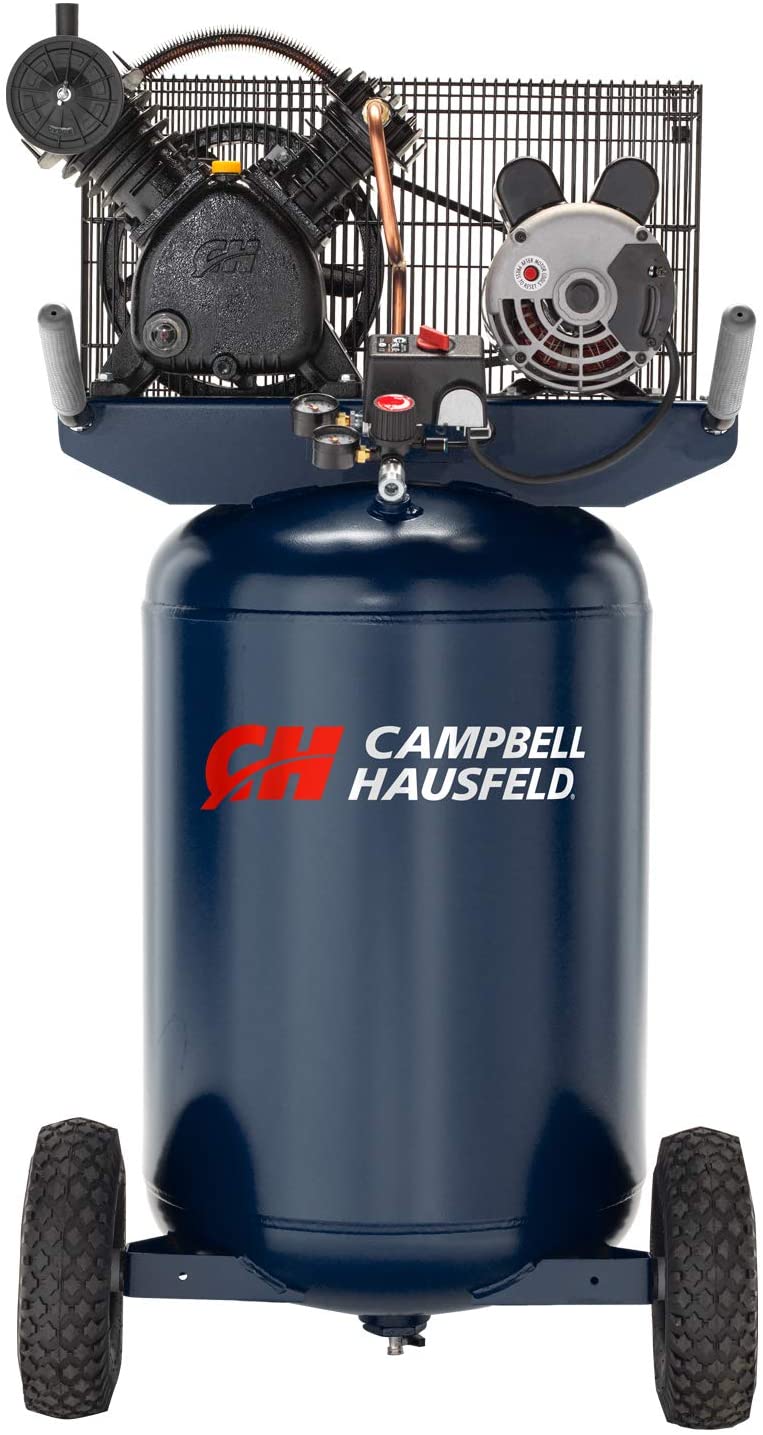 It's always fun to find products that provide you with the same high-quality performance, but this is the exact product to get your bargain hunting juices flowing for a lower price. The oiled compressor offers an effective cooling system that's greatly needed in a two-stage air compressor due to the high temperatures they create.

Thanks to this, they'll last for longer, on average 5000 hours or even more. This 80-gallon tank, coupled with the 12 CFM and 175 PSI, will allow you to operate almost any pneumatic tool. You'd most likely use this compressor in a workshop as it's really heavy, the vertical design allows it to take up very little space.

Two-stage air compressors can reach dangerously hot temperatures because of the amount of pressure created. This can easily lead to damage for an oil-free air compressor. However, oil compressors like this tend to fare far better as the lubricant acts as a natural cooling system.

This 2-stage air compressor has a 60-gallon vertical tank; this will give you enough pressurized air to operate continuously on tasks such as sandblasting or spray painting cars. A common problem for air compressors is sudden power fluctuations; this can damage your compressor.

However, the built-in thermal overload system decreases the likelihood of this problem. 20 CFM and 175 PSI are more than enough to operate almost any pneumatic construction tool. You'll benefit from all these features for an expected 30,000 hours.

Providing upwards of 175 PSI and 20 CFM, you'll have more than enough pressure and airflow to operate high-grade pneumatic tools successfully. Various tools also have different fittings that require separate nozzles and fittings; having higher pressure capabilities provides extra flexibility to the users in terms of the fittings they can use.

Providing an operating capacity of 13.5 CFM and 175 PSI will be suitable for most construction site tasks. However, due to it being a 2-stage air compressor, it creates a significant and dangerous heat level. Thankfully, the oil lubrication and the patented cooling system keep the temperature at a steady level.

If a drastic power surge, the thermal overload protection system would adequately defend against any possible damage, instantly shutting down the compressor. 60-gallons is plenty of air, but it only takes a short few minutes to return to 175 PSI completely when this runs out.

This product has plenty of protection against sudden power surges as well as overheating. You can never be too careful with this sort of risk as it can damage your compressor and even be a safety risk to you.

Sporting an industrial-class 230-Volt motor, it's the capability to provide 17 CFM and 175 PSI is no surprise; you'll benefit from operating this device with almost any pneumatic tool that you want. Considering that, overheating can be an issue, although you'll have no problem keeping temperatures down to safe levels with the patented piston cooling system.

The sizable 80-gallon tank will offer suitable runtime for even the more demanding tasks like spray painting or sandblasting. The only downside is that the 470lb weight limits where you can use it. You'll be best investing in a longer hose if your workshop is on the larger side.

What makes this product stand out is that it's great to provide such high-quality features such as the 17 CFM and 175 PSI. However, with the dual coupling system, this allows two users to benefit from this at once. Ultimately, this increases productivity.

Pros and Cons of a Two-Stage Air Compressor

Two-stage air compressors have a variety of benefits and downsides. We've included a few down below.

Regulate Temperature Effectively - Most manufacturers include a cooling stage between the two separate pressurization stages, as this can cause temperatures to rise to a dangerous level. You'll also notice that high-quality compressors provide multiple ways to help regulate temperature.

Can Operate High-Grade Tools - Two-stage air compressors are used to increase the pressure to operate high-powered tools. The first stage will take the pressure within the chamber to around 100 PSI; the second will increase this to about 175 or more.

Usually, Come With Two Couplers - The large amounts of pressure that can be created means that most manufacturers will include two couplers for two people to operate the compressor at once. If they're universal, that's even better.

They're Heavy - Two-stage air compressors are usually extremely heavy; if they've not got wheels to help transport it around, it might be best if it was installed in a permanent position.

Single-stage air compressors are better suited to low-pressure tasks as they don't create the same high-levels as a two-stage. They tend to be a lot easier to move around as they're lighter. However, your two-stage air compressor will be able to operate high-grade pneumatic tools like sandblasters or spray painting guns.

Hold up, are you interested in other topics related to air compressors? If so, these might be something to check out:

In the following section, we've compiled and answered some of the most commonly asked questions regarding two-stage air compressors.

Yes. Due to the weight, they are best used on construction sites and placed in an area they can reach most tasks by using a long hose. They can also be installed in mechanic workshops. They're best used on tasks that use tools that require high-pressure airflow.

Yes. If you're an individual buying it for home use, it's unnecessary. However, if you're using this compressor for your business, you should see it as an investment. Although there are some costly models out there, there's always a bargain to be found, just like the one we featured above.

They do tend to be heavier than a single-stage air compressor due to the extra parts. Many two-stage air compressors can range from 150lbs to 500lbs like the ones we've featured above. Some on the lighter end of the scale does come with wheels to help transport it around. However, larger weighted compressors should just be installed in a particular spot.

What Do I Need To Know Before Buying A 2 Stage Air Compressor?

There are a couple of things to consider before buying a two-stage air compressor: 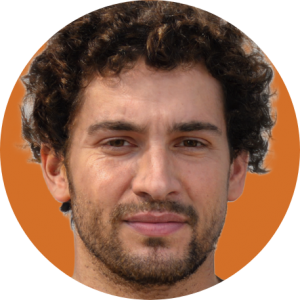 My name is Cody and I've been a writer for Tool Tango for quite some time now. I've always had a knack for building things with my hands and creative writing, so being able to combine the two has been great. I love being able to give back to the DIY-community, while also learning a thing or two along the way. When I'm not writing, I enjoy watching Netflix with my girlfriend, fishing, and working in the shop.