While a bandsaw may not be the first piece of machinery you think of for a workshop, it’s definitely one that can make a huge impact on your workload.

The best benchtop bandsaws are usually designed for portability, as well as dealing with intricate furniture cuts that others saws simply can’t recreate without a serious amount of effort.

Hoping to cut right to the chase? Below are the best benchtop bandsaws:

Comparison of the Benchtop Bandsaws

What Size Bandsaw Do I Need? 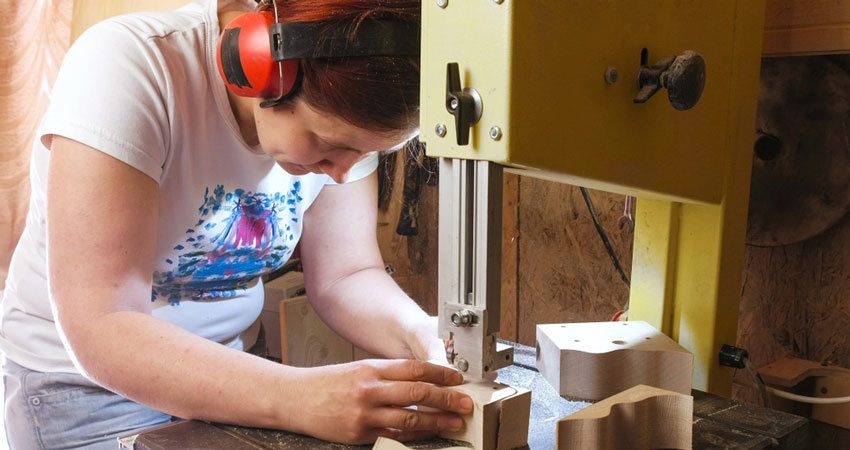 The size of your bandsaw typically dictates how deep it can cut. Therefore, different sizes are better suited for specific applications. For example, a 14” bandsaw can do pretty much anything you need when making smaller furniture. A 16” model would be better but it’s not mandatory.

When working with larger pieces of material you could even consider

​an 18” or a 20” bandsaw. But benchtop bandsaws are typically smaller. You don’t need something huge for smaller projects so even a 9” bandsaw might often do the trick. Just keep in mind that often the motor power will be equally important if not more so, as will the resaw height.

Can You Really Find a Quality Benchtop Bandsaw That’s Affordable?

Finding a good cheap benchtop band saw is tricky but not impossible. These machines come in a variety of models and with a wide range of specs. Therefore, it’s possible to find the ideal combination of features to suit your particular needs.

This is especially true if you don’t tackle varied projects and focus mainly on a few types of cuts on similar materials. You can always trade of some overall build quality as long as the motor, wheels, and blade are good. Of course, the more you pay the better the saw will likely be, and no professional carpenter should settle for average equipment.

Review of the Best Benchtop Bandsaws

To get a sense of what type of saw you might need in your workshop, here are some of the best benchtop bandsaws reviewed and compared based on features, intended uses, price, etc. 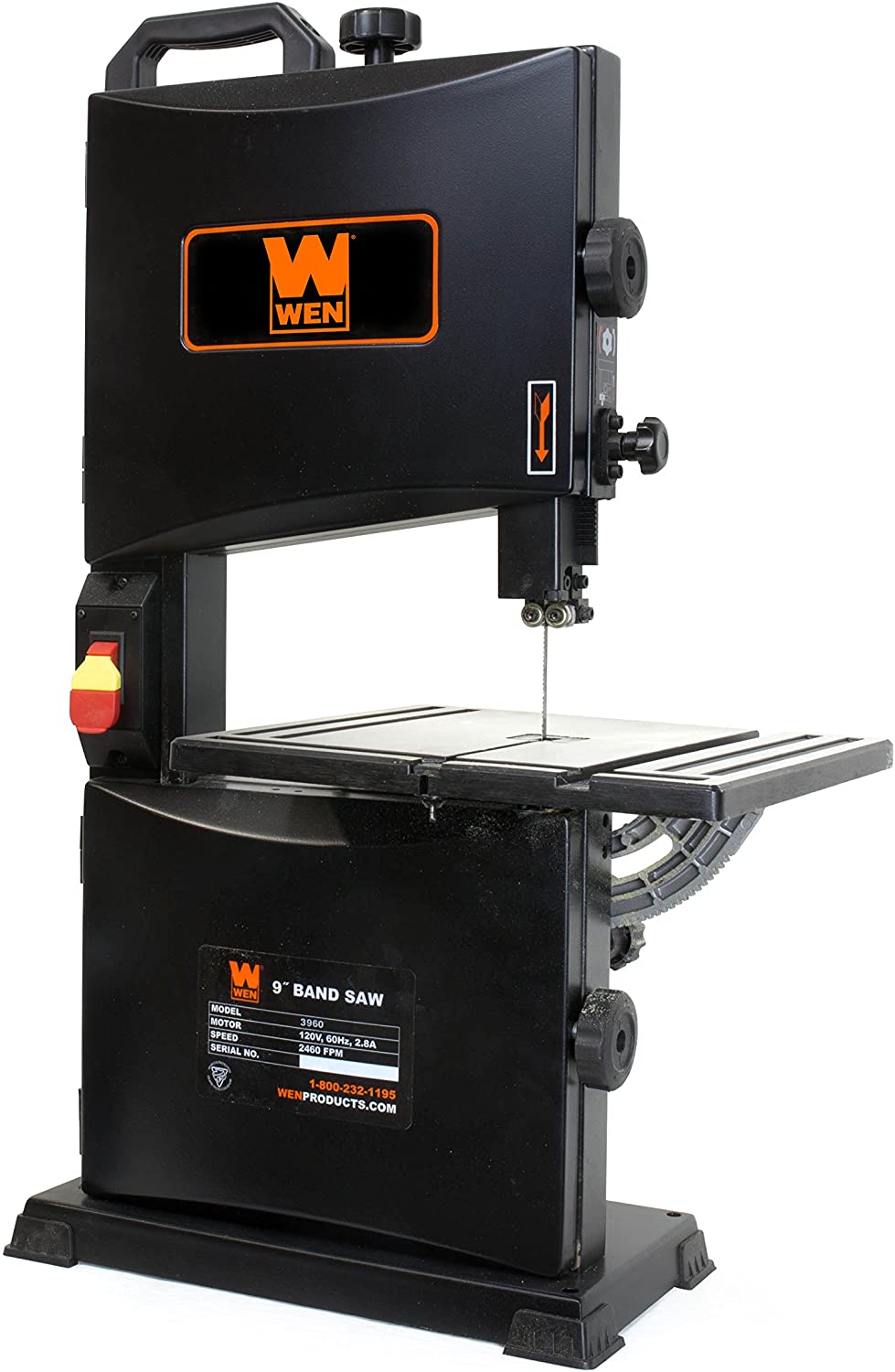 If you need a 9” bandsaw for small projects this could be the perfect fit. While it does suffer from some adjustment issues, the quality mechanism and included accessories are spot on.

The WEN 3939T model comes with a 2.8A motor which is powerful enough for most tasks yet doesn’t cause too many unwanted vibrations. Build-wise, it’s a bit flimsy. But this also offers the advantage of making the benchtop bandsaw lighter and easier to relocate, hence the carry handle component.

It will make it easy for you to cut even more aggressive curves due to its superior precision and the large work table will always be an advantage.

Two components probably stand out the most, the front rail and the fence. You can make very accurate straight cuts as well as curved cuts with this 9” saw. And don’t let its power fool you either. The motor provides enough juice to do resaws on smaller pieces. 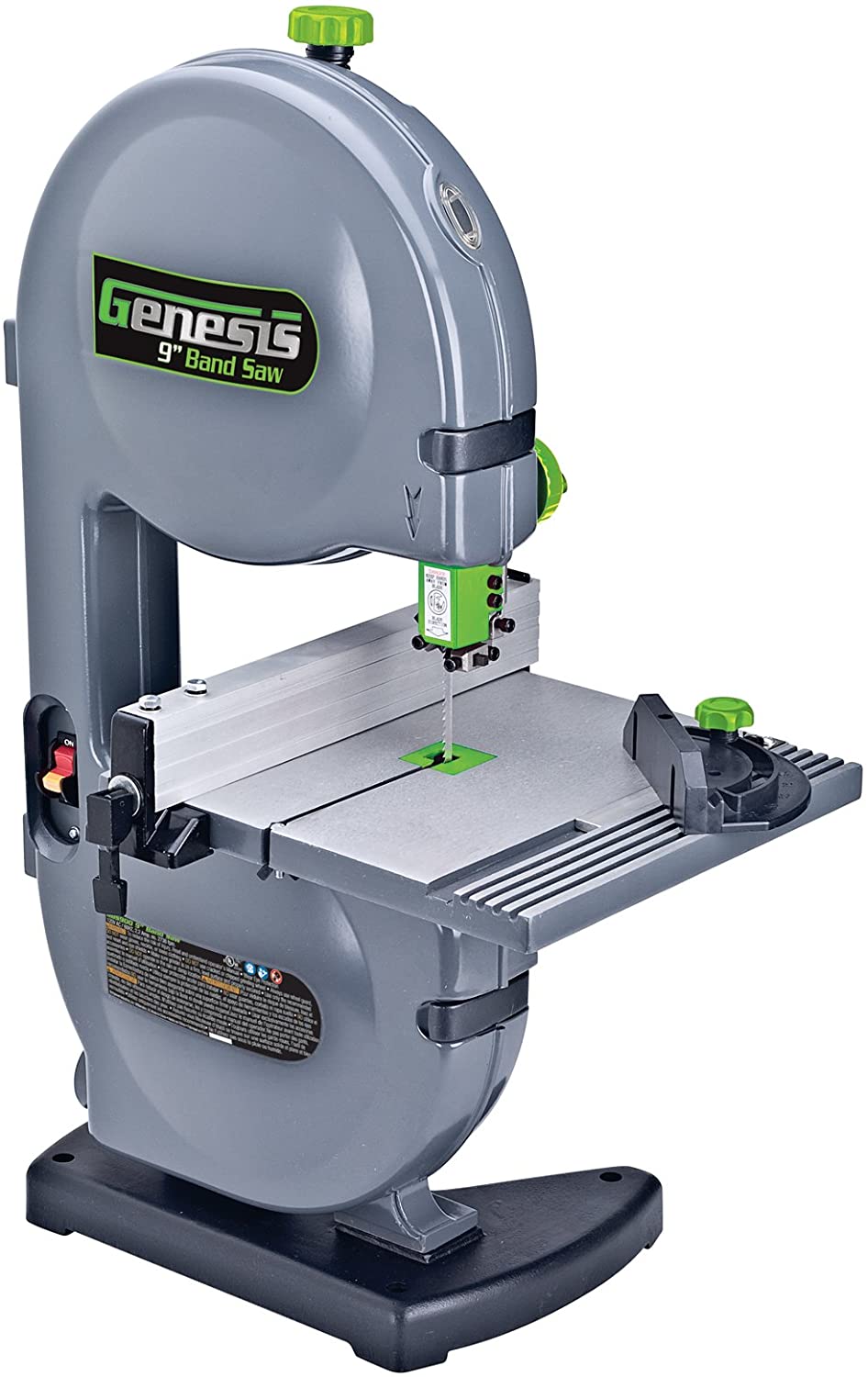 This is a robust benchtop bandsaw that offers good stability and an almost noiseless experience. It has a decent 2.2A motor and a tilting table which will open up more possibilities for making intricate curved cuts.

We also like the accuracy of the blade tracking system, which is on par with anything at this price range or above it. However, the angle indicators are a bit hard to see without a proper work light.

That said, the motor provides plenty of juice to cut through wood, plastic, even brass. Provided you get additional blades, that is. As the GBS900 comes with a 6tpi blade for woodworking only.

One of the coolest things about this bandsaw is its ease of assembly. Of course, the tilting table is also a standout feature and compensates for the slightly smaller work surface. Between these features and the superior accuracy of the tracking system, it definitely deserves the number two spot on this list. 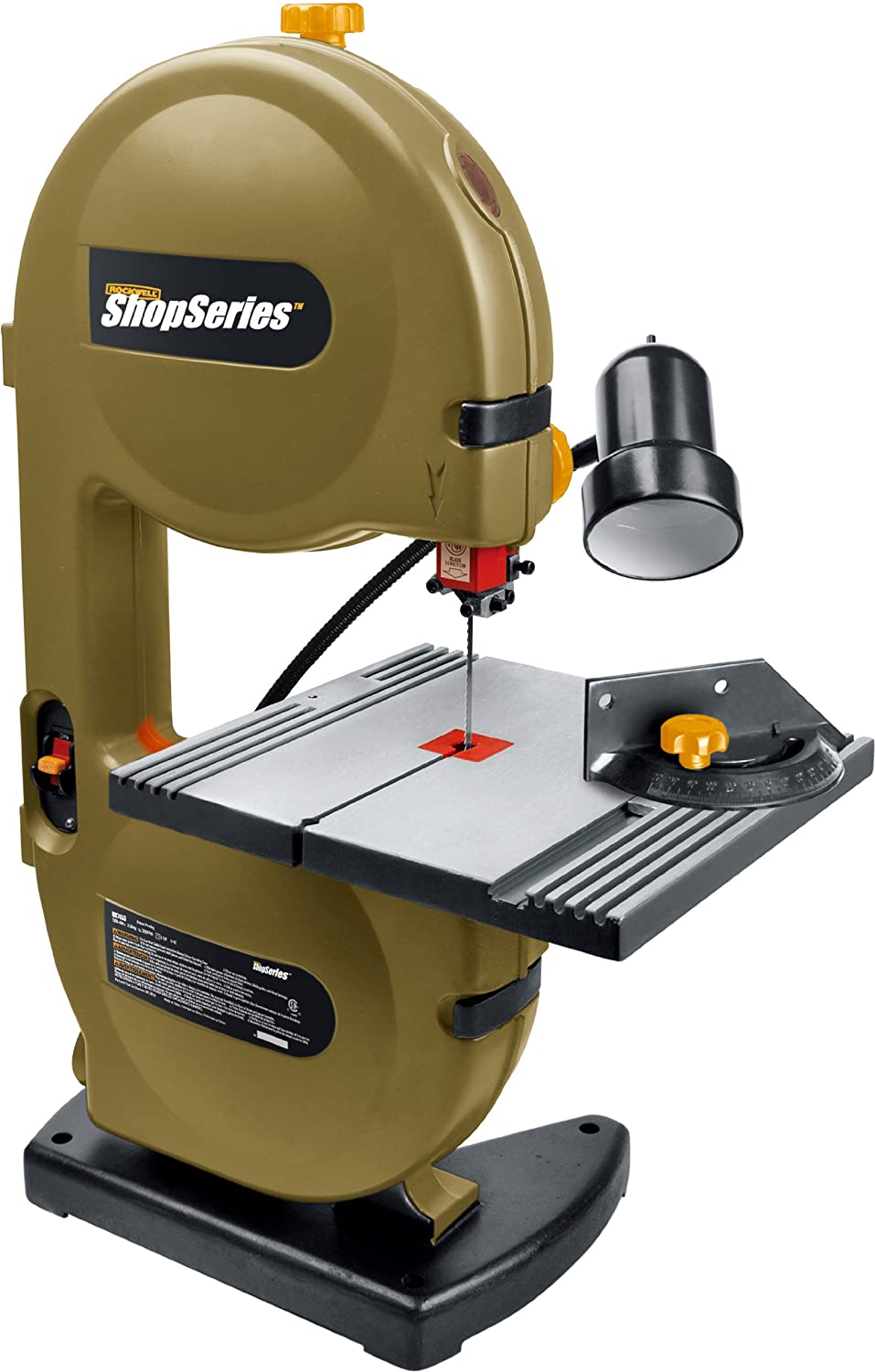 If you’re looking for an entry-level saw, the ShopSeries RK7453 could be the right one for you. It’s an affordable 9” machine with sufficient blade spinning power that allows for making micro rack adjustments, which isn’t something you often find in this price range.

While there may be some issues with longer straight cuts, the bandsaw handles curved cuts really well once properly fine-tuned. The stability is an advantage and the entry-level blade does seem to perform outside its price range. All in all, it offers a nice combination of specs at an entry-level cost for hobbyists.

What Makes This Product Stand Out

One of the things that surprises the most is the quality of the belt and pulley connections. Although the blade can sometimes struggle on straight cuts, these connections are top-notch and probably outshine any other characteristic of the saw. Unless you also count how robust the housing is. 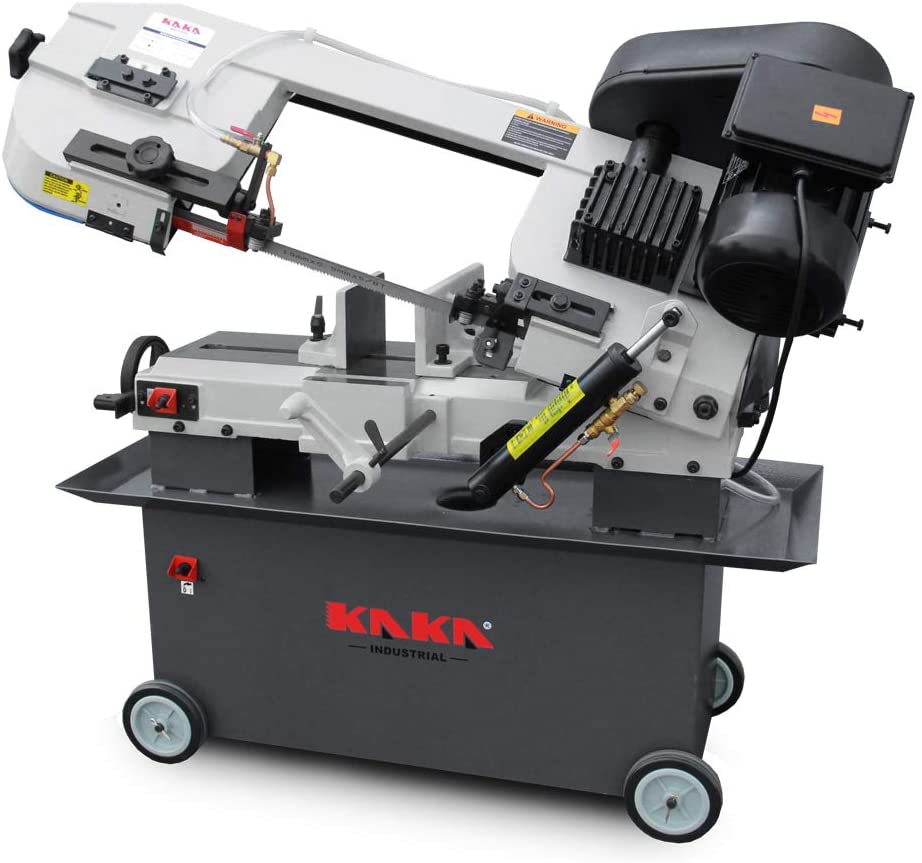 A good metal bandsaw may set you back a few bucks – but having a great one should be worth the extra cost. This machine can make short work of wood and metal work pieces and it allows cutting both rectangular and circular objects with greater control.

The use of an adjustable downfeed hydraulic cylinder is good news. It will extend the blade life while also improving the level of control. Furthermore, the adjustable blade speed allows for optimal machine calibration for different materials and cuts. However, note that this machine is over 300lbs and thus not suitable for just any workshop.

What Makes This Product Stand Out

Apart from being able to tackle round and rectangular pieces of material this horizontal bandsaw has one more thing that gives it an edge – the adjustable blade speed. Even though the bearings may not be the best overall in terms of quality, being able to use optimum speeds for various materials will improve the quality of your work. 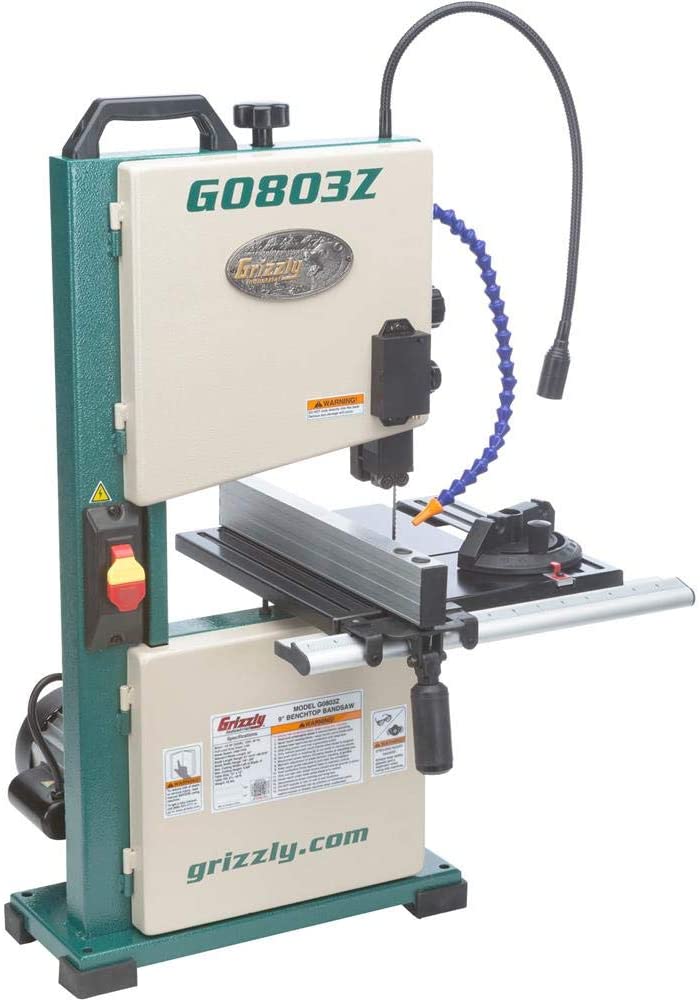 This bandsaw is light, easy to adjust, and very accurate. The fact that it comes with both a work light and laser guide make it good for both intricate work and beginner-friendly tasks.

We also like the dust blower component, even though it makes the saw louder than others. The aluminum rip fence is high quality. Although it doesn’t come with adjustable blade speed, the 2,460 performance on a 1/3HP motor is more than enough for a 9” bandsaw at this price range.

The work table can be tilted up to 45-degrees so there’s a wide variety of cuts you can make with little effort.

There are two standout features in this saw – the laser guide and dust blower. These two components help maintain a clear line of sight, improve precision, and even turn up less rugged edges in the finished product. For a 9” tabletop bandsaw that’s more than enough, at least at this price range.

​Pros and Cons of ​Benchtop Bandsaws

​​Bandsaws are often compared to table saws in terms of usefulness. Here are some clear advantages of what a bandsaw can offer as well as some setbacks you may encounter for choosing one.

What makes benchtop bandsaws niche but also very important in a workshop? Mainly their ability to perform a wide array of cuts, ranging from the simplest straight cuts to intricate curved ones. Picking a good bandsaw requires balancing out things such as blade size, machine weight, the quality of the accessories, motor power, among other things.

In case you still have questions that haven’t been answered by the reviews, here are some other things you might want to know about benchtop bandsaws. Just so you can get a better understanding as to whether you really need one in your workshop.

How Heavy Are Benchtop Bandsaws?

The weight of the saw is highly dependent on the size of the motor and the quality of the materials used. That said, you can expect most benchtop bandsaws to weigh over 40lbs when fully assembled. Of course, you can get lighter models but also models that clock in at over 70lbs, for heavy-duty work.

What Is the Maximum Cut Depth of a Benchtop Bandsaw?

Benchtop bandsaws come in so many sizes that it’s hard to put an exact number on the maximum cutting depth. It will often depend on the model. Typically, some manufacturers will list the maximum cutting capacity or depth separate from the size of the blade. That’s because depending on the actual saw design, the cutting depth will vary and won’t be equal to the blade size.

What Is a Benchtop Bandsaw Used for?

A benchtop bandsaw is primarily used for creating intricate cuts as well as cutting wood and metal in curved or irregular shapes that you couldn’t otherwise get with a miter saw or basic table saw. In many ways, it’s similar to a jigsaw but allows more control and better precision.

Can I Cut Metal with a Benchtop Bandsaw?

Although the primary use of benchtop bandsaws is woodworking, given the proper motor and the right kind of blade, you can use one for metalwork projects too. Usually, a 2HP motor will be ideal for cutting metal with a bandsaw, but even a smaller one could do the trick on less complex projects.